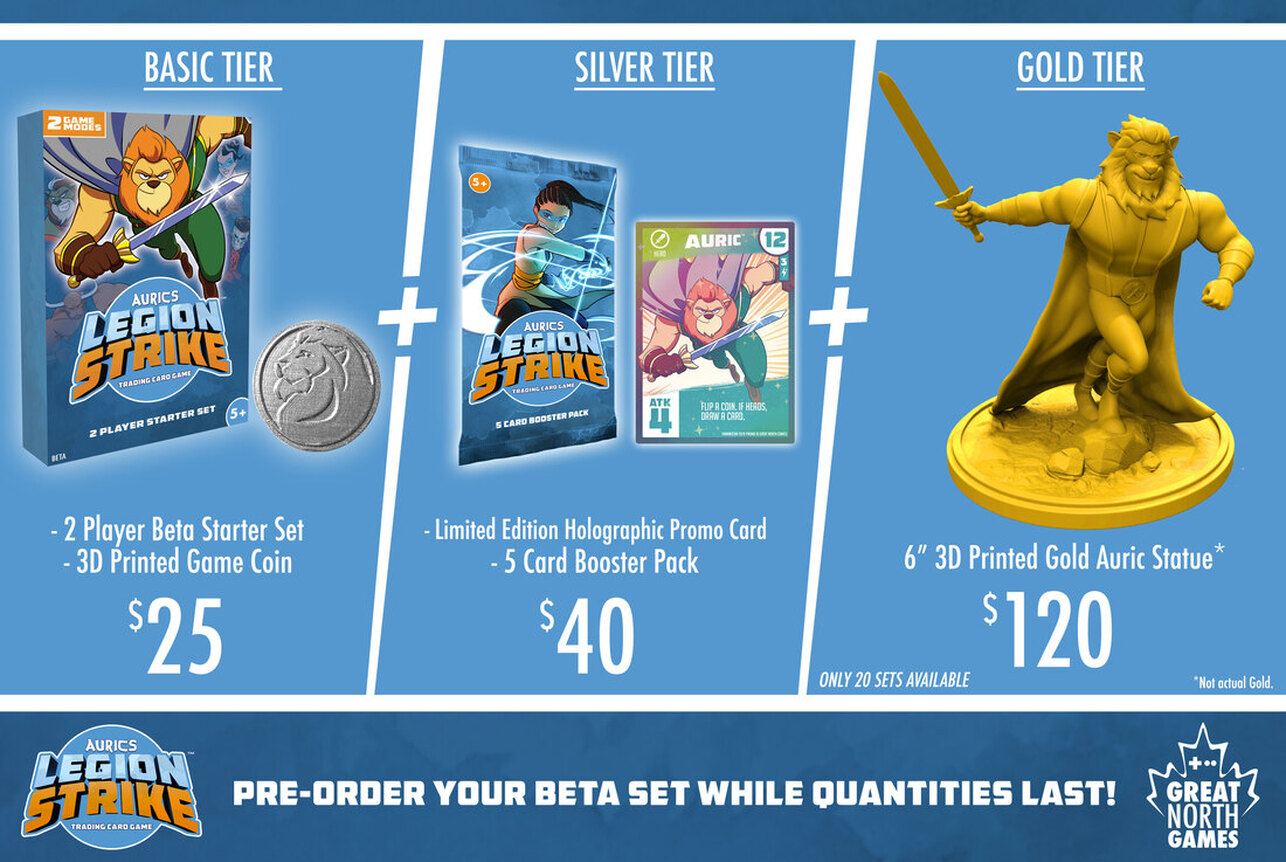 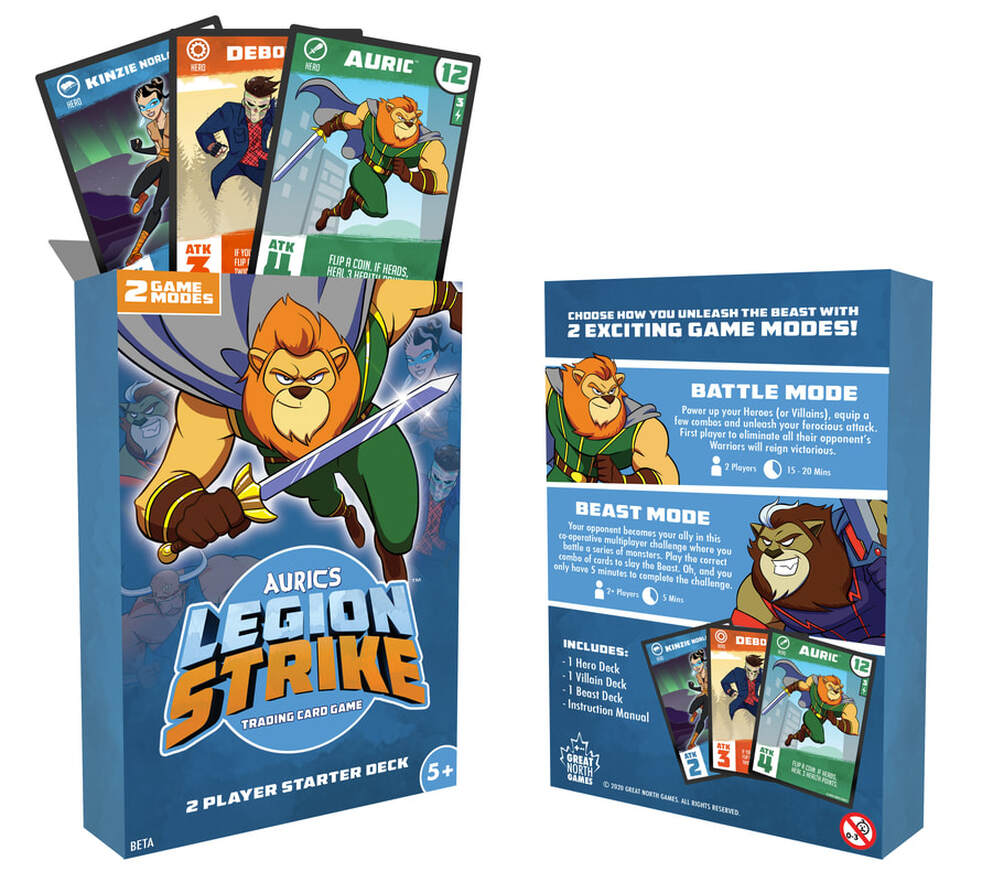 CHOOSE HOW YOU PLAY WITH 2 EXCITING GAME MODES!

Power up your Heroes (or Villains), equip a few combos and unleash your ferocious attack. First player to eliminate all their opponent's warriors, will reign victorious.

Your opponent becomes your ally in this co-operative multiplayer challenge where you battle a series of monsters. Play the correct combo of cards to slay the beast. Oh, and you only have 5 minutes to complete the challenge.

Brought to you by these great sponsors

In April of 2015, at our local TimminsCon we launched Auric of the Great White North, a new comic book that featured something special, the first superhero based out of Northern Ontario (specifically, my home town of Timmins, Ontario).  With the help of some local sponsors, we printed up 200 copies of our first issue. The lead-up to the launch was nothing but magical as the media took hold of the story and ran with it. We were featured on CBC Radio, CTV news, the Timmins Daily Press, and a selection of northern news websites, comic book news websites and several podcasts throughout northern and southern Ontario.  Our initial first printing of 200 copies sold out within a couple weeks and, as of today that specific issue has gone to print five times and has sold over 1000 copies.

Since our initial launch, we have released more issues of Auric of the Great White North and have continued building our brand at Great North Comics.  Our Facebook site for Auric has just recently passed the 1830 members mark. In 2017, our comic and Auric Artist Andrew Thomas were highlighted in Heroes Manufactured, a very well-received independent documentary on the Canadian Comic Convention Scene.  Last year we won the CanComicsWikiAward, for Best Comic of 2018 for Auric #3, and Auric writer Davis Dewsbury won Runner-Up for Favourite Writer. Another highlight from 2018 was when our comic and images of Auric were featured as a prop on a 2018 episode of Global Television’s Private Eyes.  In 2019, Auric of the Great White North #5 was nominated for best issue in the Sequential Comic Awards. As you can see, Auric is getting plenty of exposure.

This April 18th & 19th we plan to release something brand new at TIMMINSCON 2020.

Under our new games division GREAT NORTH GAMES, we plan to release the Open Beta Set of our newest project, AURIC’S LEGION STRIKE, the first ever multiplayer trading card game featuring Canadian Super Heroes.  Legion Strike is a fun and innovative card game that will, not only have lots of room for future expansion, but can be played in more than one format (Player Vs Player or Co-operative Multiplayer).  It is our intention to promote this launch heavily on social media and reach out to our friends in the local media to spread the word about our latest exciting project.

We are looking for sponsors to help us finance the printing costs of the first 100 sets of AURIC’S LEGION STRIKE.  Your sponsorship dollars would go towards the production of the cards, the packaging and the accompanying game coins.  We have two different sponsorship tiers for your consideration. The following options are currently available;

- First 100 starter-deck sets get a sponsorship card inserted in the deck that promotes your business.
- You receive One free set (Starter Deck), Including One Limited Edition ENHANCED Auric Card!
- You will be credited as an original game sponsor on the Auric Legion Strike section of the greatnorthcomics.com website with a link to your     business website.
https://www.greatnorthcomics.com/legion-strike.html

- Every Starter Deck Set for the first 2 years of production will have a sponsorship card inserted in the deck that promotes your business.
- For the first 2 years of production, Game Instruction Sheet will credit you/your business as an original game sponsor.
- You will receive 2 free sets (Starter Decks) Including TWO Limited Edition ENHANCED Auric Cards!
- Each of your sets will include a Very Limited Edition Gold-Coloured Poker-Chip Sized Game Coin (regular sets will have a Silver-coloured           Toonie-sized coin).
- You will be credited as an original game sponsor on the Auric Legion Strike section of the greatnorthcomics.com website with a link to your     business website.
https://www.greatnorthcomics.com/legion-strike.html


Sponsors would be required, by email, to provide hi res business logo and text (Business address, phone number, and internet URL).  For an added fee of $65, Auric Artist Andrew Thomas will design your sponsorship ads from scratch. We would need this content from sponsors by latest, Monday March 31st, 2020.

If you are interested in becoming a sponsor for this groundbreaking project please email me, Davis Dewsbury at nancyraygun@gmail.com or Andrew Thomas at Andrew@armelimonline.com.

And…  Long Live The North! 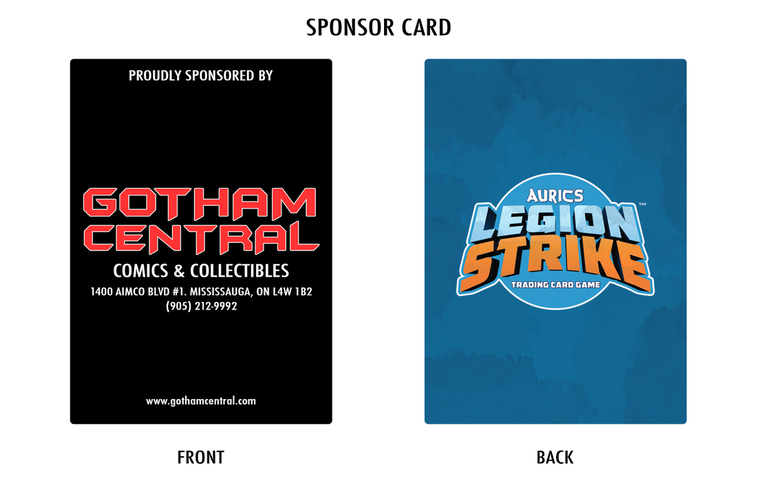